In the Spring of 1992, Steve, Lily and I moved from our furnished rental flat in West Dulwich to our first, “we’ve-got-a-mortgage” home in West Croydon. The move was achieved with massive amounts of support from our families, particularly our parents and grandparents. The support was financial, material and emotional, by which I mean cash towards the deposit, furniture and curtains, and baby-sitting, respectively. Gosh, it was an exciting time.

One of our house-warming presents, from our beloved Gran Elsie (Steve’s grandmother), her sister, Auntie Doris, and their best-friend, honorary Auntie Etty, was a microwave oven. Come pay-day, this prompted me to head for Dillons in the Whitgift Centre on Wellesley Road and buy Sarah Brown’s (no, not that one: the cookery writer one) Vegetarian Microwave Cookbook, which has the enticing sub-title, delicious time-saving dishes for today’s health-conscious cook. I mean, who could resist that? 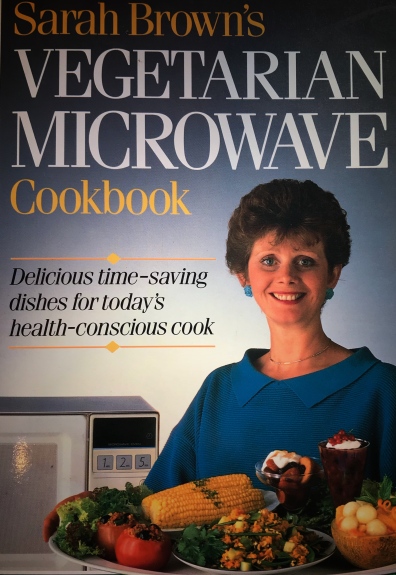 In fairness, this is more than simply a collection of recipes with accompanying photographs. As with many publications from the wholesome Dorling Kindersley, it is more in the way of an illustrated reference guide for adults to the science and art of microwave cookery. I purchased the 1989 paperback edition. As far as memory serves me, this was the third cookbook I owned.

What to cook from the book? This one has been much more of a struggle than my first two forays back into long-owned recipe books. The challenge hasn’t been about the need to adapt to plant-only produce or because of the rarity of particular ingredients. No, it has been testing because I have never really gotten to grips with microwave cookery. Sure, we use “the micro” to re-heat food and occasionally to defrost soups I’ve made and frozen, but with the exception of using it to blanch a bowl of hard root vegetables from time to time, I don’t cook meals from scratch in the micro. I enjoy cooking and seeing the ingredients come together in a pan, and stirring, tasting and adjusting as I go is a huge part of my enjoyment in cooking. I don’t get the same pleasure from setting the timer, hitting the start button, waiting for the ping (beep-beep with our current model), stirring, re-covering, re-setting the timer, and on and on.

It also put me off that, judging by the instructions in this book, the most powerful microwave available to the domestic market in the late 80s/early 90s was 700 watts. I might not be the expert on microwave cookery, but I do know enough to understand that timings are the key. I’m sure that all families have a cautionary tale of early microwave misadventure. In my family, it wasn’t anything as (apocryphally) tragic as committing canicide on the family pooch: “we only put him in the oven for five minutes to fluff-up his fur after his bath”. Our micro disaster involved my grandfather mistrusting both the science of microwave cookery and the feasibility of the recommended cooking times. How could half a pack of sausages be reheated thoroughly in just three minutes when they’d been in the fridge for a day? Best put them in for 15. Blackened bullets with that mash, anyone? Sarah Brown offers precise timings for 500W, 600W and 700W ovens. Our De’Longhi is 900W. It’s not as simple as deducting by a third the 600W timing, is it? We all know microwave cooking times aren’t strictly linear: there’re some electromagnetic wave shenanigans involved in adjusting cooking times . I headed to Google for help.

Recipe selection wasn’t obvious. The recipes in the book deploy eggs, a lot. I wasn’t at all sure how egg replacers, whether the potato or tapioca flour ones, chia or flax seeds, or apple puree, would fare in a microwave.

After days of hemming and hawing, I settled on two side dishes: braised red cabbage and broccoli with olives and garlic.

In terms of culinary ability, cooking these two dishes didn’t require any, beyond being able to chop vegetables. So they were very easy in that regard. I didn’t find this cookery very engaging though and would challenge the book’s claim that, “using the microwave is a marvellously quick way to make delicious vegetable dishes”. If you are preparing more than one dish and have a sole microwave, the recipes have to be cooked sequentially and the minutes clock up.

The braised red cabbage, prepared with onion, garlic, celery, fennel seeds, raisins, red wine and a teaspoon of agave syrup (I substituted out the recipe’s honey) tasted pleasant enough, and the raisins plumped up beautifully. But, and there are two big buts here, total cooking and resting time instructed in the recipe was 21 minutes (hardly “marvellously quick”, by the way). Yeah, after that time, even with my extra wattage, the cabbage was still so crunchy it wouldn’t have been out of place on a buffet platter of cruditees and dip. For me, braised conjures up soft, slowly stewed food: this cabbage was most definitely not that. I ending up doubling the cooking time. The second “but”: I regularly make a couple of Nigella braised red cabbage recipes on the stove. They are much tastier, make the kitchen smell gorgeous and the result is properly braised cabbage.

The broccoli with olives and garlic was more successful. Essentially, this was broccoli florets and chopped onion covered by a coarse-textured sauce of olives, tomatoes, red wine vinegar, garlic and garam masala. It was very tasty – in fact the sauce packed a powerful garlic punch – and as I prefer broccoli al dente, I stuck to the recommended cooking times. 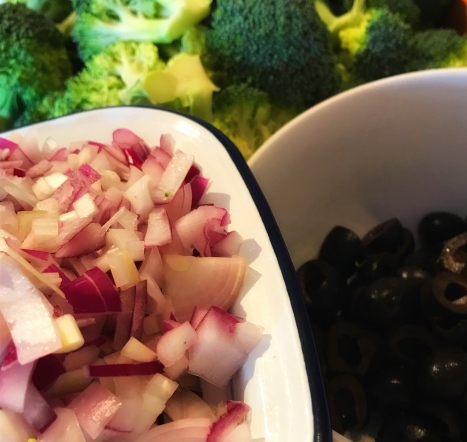 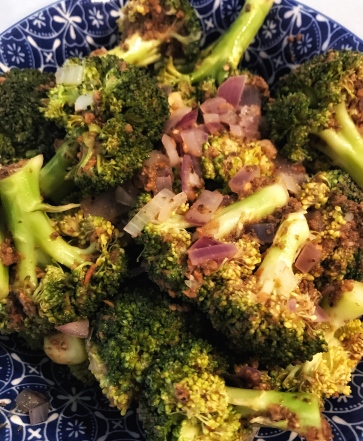 The most intriguing aspect of revisiting this book was the bookmark that fell out as I was leafing through the pages.

It is a gatefold bookmark with the Dillons logo and phone number for something called The Book Line on one half (too early for a website address, of course). The other half is marketing on behalf of, and a detachable slip one is encouraged to self-address and post to, the British Coal Board. The promotion urges those of us with a fireplace to reinstall and use them: “the best fires burn with British coal”. My, how times have changed.

The bookmark has been reinserted and the book put back on the shelf. I don’t think I’ll be returning to it anytime soon. Now to make this evening’s dinner, rattling some real pots and pans as I go.

To finish, yes, I do know that meicrodon is, properly, the Welsh for microwave, but popty ping is so much more fun. And, there is a campaign somewhere online to have popty ping officially recognised as a Welsh translation of microwave, so it can only be a matter of time.